Have you seen these Crazy Rumors?

I wrote much about marketing and social media on this blog. Amongst all the great things we learn about social media, there are also a dark side to social media. Strange people roaming social media and spreading rumors, in fact what we get to witness is not always positive or exciting. The question is, did the marketing battlefield moved over to social media?

Here are a few of my articles about social media:

Before jumping into the discussion on "rumors", go see this report. This will help you appreciate why the camera business is important for Olympus and how their imaging business benefits their medical business...

When you go deep deep down in the dark secret world of conspiracy and you associate with secret agents, special "news" carriers, the mob, hard bearded double agents, all squatting in dark smoke filled rooms secretly directing the course of digital photography, determining winners and losers, which company will be successful and which not.... it's all happening in these dark smoked filled chambers gents & girls. The latest directive out these dark chambers - The end is in 8 months.... not 8 years 😎.... 8 months!!

Camber conspiracies are echoing over social media. If you ever in need to know when Olympus will finally close down all its operations, go talk to these sources? Anyone of these trusted "social media" gossip services has been predicting Olympus demise for years. Visit this small elite group in the know -  Photorumors, DPR - Micro Four Thirds Talk, and the PersonalView. To my surprise JC from the JCristina YouTube channel eagerly tapped into the deep dark chambers, news feeds and JC decided to share all he learned with an urgent/crises video update, SEE the video below.

Why would you say I do not put great value to JC's creative cloud rambles after watching this.....? 😎

THE ULTIMATE PROOF.....our friend JC used the graphic below in the above video. I added my own comments/questions to the graph:- 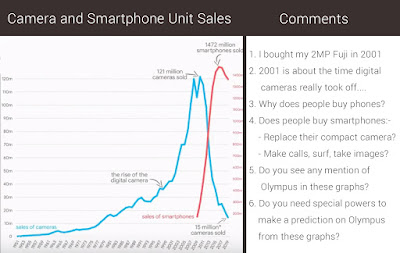 NEWS: Not all are bad, social media also have many good, thinking photographers.....

When it is an optimistic and balanced view you after, you don't need to search wide to find good and credible sources. One such article by Nick Summers at Engadget. Another positive source and good company is the Mu-43 photography forum. Also see this interesting link.

In reaction to all the rumors, finally this Statement by Olympus

Now back to the Chambers latest news heading... "8 months left for Olympus cameras".....

Below is an "edited" version of a forum thread I started on the ultimate rumor gossip service, the "Micro Four Thirds Talk" forum. After placing the post.... in literally hours they banned me from the forum and my post was removed.

This is the subject line and forum post I started on the DPR, Micro Four Thirds Talk forum:-


Olympus presented their 2020, 2nd QTR financial results and as expected it was quickly followed up with a storm of negative forum posts inviting the same old baseless Olympus rumors we have been living through each week for years on this forum....

Yes it is correct that camera manufacturers are challenged by the fast changing market.... as if this is the only industry challenged by change. What amazes me, are how some forum participants seem to focus only on the small visible window into the market. Even worse any effort by thinking forum participants to guide and inform others seem to only harden those spreading baseless rumors.....

It is also correct that Olympus did go through a crises in 2012. From 2012 onwards we also learn how Olympus worked hard to re-align the company, again something we see all large corporates continually do.

But for some reason, sneaky posters prefer living in the past, promoting those talking points beaten to death and focussing only on tip of an iceberg, no deeper research... how boring and disappointing...

I also posted this graphic to appeal to thinking readers..... 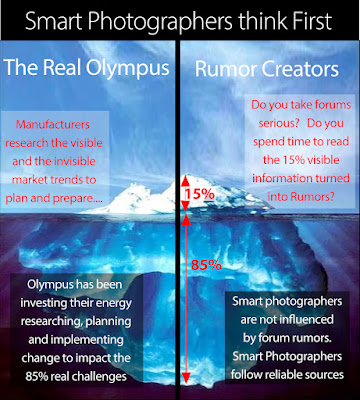 BELIEVE IT OR NOT - THIS SUMMARY IS ONLY ONE FORUM THREAD

The said original poster could not wait to add his own negative interpretation of the Olympus 2020 mid year results.  Below is a summary of his original statements plus his replies to other forum participants:-

- EM1X seems like, as I imagined, had virtually zero impact on the Imaging div bottom line
- The EM1X is not selling.
- Seems like you are very gullible to corporate PR spin.
- looks like Imaging will be a forever or near forever operating loss subdivision.....
- "Olympus being happy to continue losing money" is not what I said
- The risk is becoming another Pentax. Speaking for myself
- While Olympus has had a habit in the past of pulling out of a Camera standard
- FT (Four Thirds format) was dead because they screwed up with the size proposition
- Well sure I am only relating what some people we’re going by
- I saw 4/3 (Four Thirds) going extinct before many admitted the obvious! (inaccurate?)
- M43 (Micro Four Thirds) losing its size and weight proposition spells death for the system
- ....making an EM1X doesn’t strike me as the brightest priority
- Eventually looks like I will switch to Fuji
- I think the EM1X is a bad idea for the M43 system.

Let's see the reaction and the "company" this original poster drawn in to the forum & himself. Keep in mind the majority of these replies are loaded statements quoting inaccuracies or half truths. Below a list of these forum, rumor masters and their replies.....

- Most of those cameras are copy/paste jobs,
- .....which will only get worse the Division gets.
- At least Nikon is providing newer sensors, new bodies....
- ....until someone has the sense to either sell, spin off or close the division.
- And the Market dictates that Most Olympus cameras aren't worth the price.....
- .....which is why M43 continually fall faster than other formats....
- I'll take a Fuji X-T2/3 over any M43 camera.
- In fact, I'd even prefer the Nikon D750 over any Olympus camera.
- Through all the scandals, court cases they're still able to put out so-so products.....
- Maybe it's time for you to take off your Olympus Cap.....
- They couldn't even figure out how to make a camera-imaging division profit.....
- Olympus uses the imaging division to absorb some of the R&D costs (suggest false practices?)
- ......even less clear cut than financial statements.... (unbelievable accusation....??? )
- Maybe Sony is the smartest. Just don't mention the bad news.....
- Surely you're not suggesting the possibility of accounting anomalies at Olympus....?
- I don't really know what R&D achievements they made with the E-M1X
- Olympus will not invest in any new sensor tech....
- ....cameras with old tech, with the meaningless slight improvement
- Nobody save the last of the Olympus faithful will buy their products.....
- .....the camera division dropping profitability year after year
- Another overpriced camera for the faithful.....
- If a competent management team ever got put in place.....
- ......than fixing something with systemic problems.
- I'd be very surprised if the EM1X sells more than 50 units per month worldwide.
- Well that's because there's only a Handful of Pros that use Olympus.
- And they probably only shoot in good light.


As a final though, I prepared this image for another article I wrote. Ask yourself, does this look like a company in the process of closing down its imaging division? 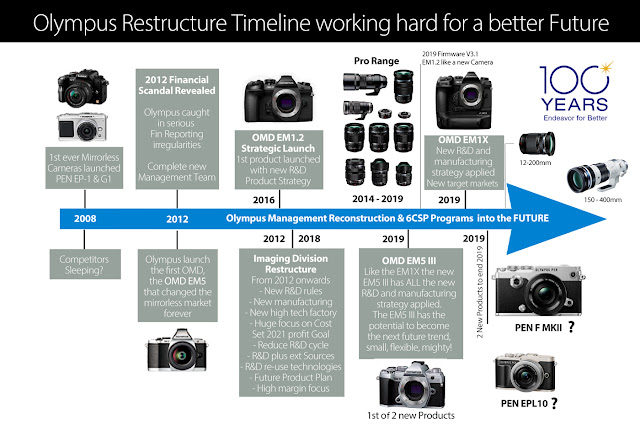 - The negative forum post that initiated my summary post.
- Another follow up post expressing frustration with the situation
- My above post to the forum was removed by forum moderators....
- Seems to me the rumor factory over at this forum has stepped up a gear
- Anyone looking for a more positive forum experience, go here